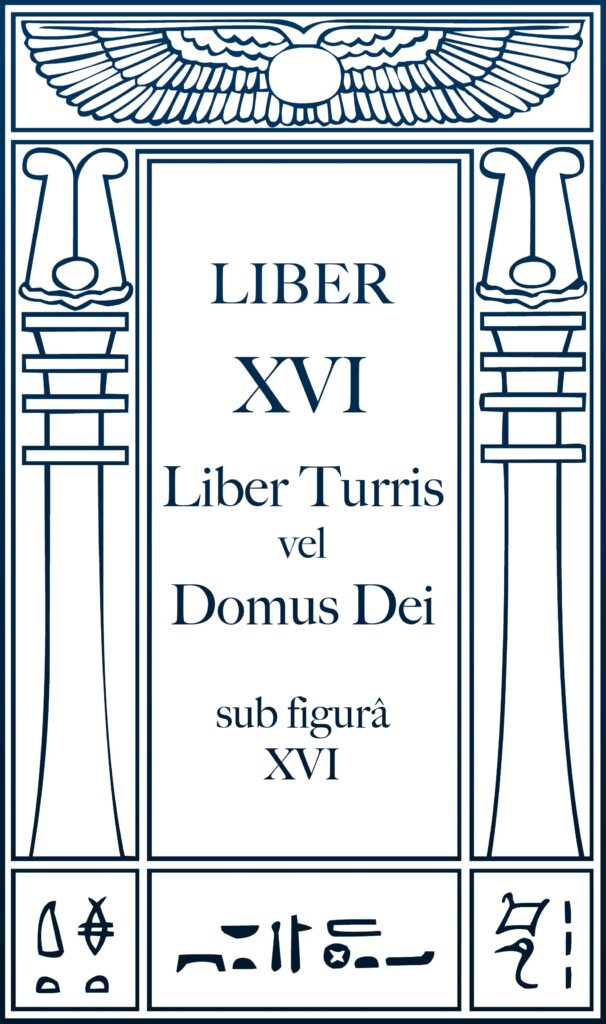 Called 'The Tower; or the House of God.' 'An instruction for attainment by the direct destruction of thoughts as they arise in the mind.
Liber XVI

0. This practice is very difficult. The student cannot hope for much success unless he have thoroughly mastered āsana, and obtained much definite success in the meditation-practices of “Liber E” and “Liber HHH.”

On the other hand, any success in this practice is of an exceedingly high character, and the student is less liable to illusion and self-deception in this than in almost any other that We make known.

[The meditation-practice in “Liber E” consisted in the restraint of the mind to a single predetermined imagined object exterior to the student, simple or complex, at rest or in motion: those of “Liber HHH” in causing the mind to pass through a predetermined series of states: the Rājayoga of the Hindus is mainly an extension of the methods of Liber E to interior objects: the māhasatipatthāna of the Buddhists is primarily an observation and analysis of bodily movements. While the present practice differs radically from all of these, it is of the greatest advantage of be acquainted practically with each of them, with regard firstly to their incidental difficulties, and secondly to their ascertained results in respect of psychology. ED.]

2. Second Point. He must also develop in himself a Will of Destruction, even a Will of Annihilation. It may be that this shall be discovered at an immeasurable distance from his physical body. Nevertheless, this must he reach, with this must he identify himself even to the loss of himself.

4. Fourth Point. Next, let every thought be inhibited in its inception.

5. Fifth Point. Next, let even the causes or tendencies that if unchecked ultimate in thoughts be discovered and annihilated.

6. Sixth and Last Point. Let the true Cause of All2 be unmasked and annihilated.

8. [This and the following verses are of modern origin.] Let the Student remember that each Point represents a definite achievement of great difficulty.

9. Let him not then attempt the second until he be well satisfied of his mastery over the first.

10. This practice is also that which was spoken by Fra. P. in a parable as follows:

11. Foul is the robber stronghold, filled with hate;
Thief strangling thief, and mate at war with mate,
Fronting wild raiders, all forlorn to Fate!

There is nor health nor happiness therein.
Manhood is cowardice, and virtue sin.
Intolerable blackness hems it in.

Not hell’s heart hath so noxious a shade;
Yet harmless and unharmed, and undismayed,
Pines in her prison an unsullied maid.

Penned by the master mage to his desire,
She baffles his seductions and his ire,
Praying God’s all-annihilating fire.

Violent and vivid smote the levin flash.
Once the tower rocked and cracked beneath its lash,
Caught inextinguishable fire; was ash.

But that same fire that quelled the robber strife,
And struck each being out of lust and life,
Left the mild maiden a rejoicing wife.

13. There is a well before the Great White Throne
That is choked up with rubbish from the ages;
Rubble and clay and sediment and stone,
Delight of lizards and despair of sages.

Only the lightning from His hand that sits,
And shall sit when the usurping tyrant falls,
Can purge that wilderness of wills and wits,
Let spring that fountain in eternal halls.

15. Sulphur, Salt, and Mercury:
Which is master of the three?

Salt is Lady of the Sea;
Lord of Air is Mercury.

Now by God’s grace here is salt
Fixed beneath the violet vault.

Now by God’s love purge it through
With our right Hermetic dew.

Now by God wherein we trust
Be our sophic salt combust.

Then at last the Eye shall see
Three in One and One in Three,

To the One who sent the Seven
Glory in the Highest Heaven!

To the Seven who are the Ten
Glory on the Earth, Amen!

16. And of the difficulties of this practice and of the Results that reward it, let these things be discovered by the right Ingenium of the Practicus.