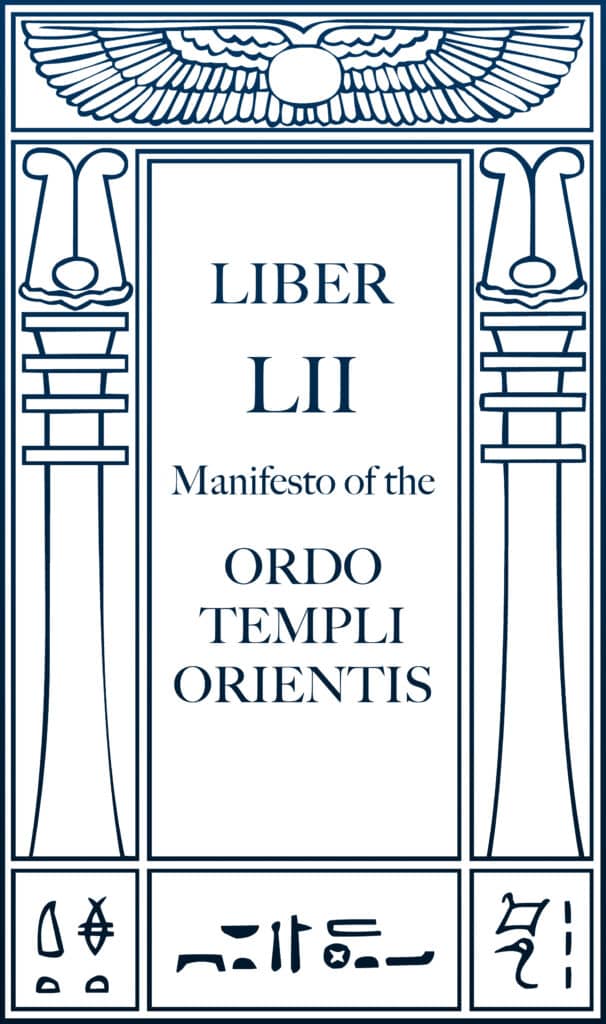 Manifesto of the O.T.O.

An elementary suggestive account of the work of the Order. The preliminary paper of the A∴A∴ (Liber XXXIII) may be classed with this.
Liber lii

Salutation on All Points of the Triangle;

Respect To the Order.

To All Whom It May Concern: Greeting and Health.

Do what thou wilt shall be the whole of the Law.

The O.T.O. is a body of initiates in whose hands are concentrated the wisdom and the knowledge of the following bodies:

It does not include the A∴A∴, with which august body it is, however, in close alliance.

It does not in any way infringe the just privileges of duly authorized Masonic Bodies.

The dispersion of the original secret wisdom having led to confusion, it was determined by the Chiefs of all these Orders to recombine and centralize their activities, even as white light, divided in a prism, may be recomposed..

It embodies the whole of the secret knowledge of all Oriental Orders; and its chiefs are initiates of the highest rank, and recognized as such by all capable of such recognition in every country in the world.

In more remote times, the constituent originating assemblies of the O.T.O. included such men as:

The names of women members are never divulged.
It is not lawful here to disclose the name of any living chief.

It was Karl Kellner who revived the exoteric organization of the O.T.O. and initiated the plan now happily complete of bringing all occult bodies again under one governance.

The letters O.T.O. represent the words Ordo Templi Orientis (Order of the Temple of the Orient, or Oriental Templars), but they have also a secret meaning for initiates.

The Order is international, and has existing branches in every civilized country of the world.

The aims of the O.T.O. can only be understood fully by its highest initiates; but it may be said openly that it teaches Hermetic Science or Occult Knowledge, the Pure and Holy Magick of Light, the Secrets of Mystic attainment, Yoga of all forms – Gnana Yoga, Raja Yoga, Bhakta Yoga and Hatha Yoga, and all other branches of the secret Wisdom of the Ancients.

In its bosom repose the Great Mysteries; its brain has resolved all the problems of philosophy and of life.

It possesses the secret of the Stone of the Wise, of the Elixir of Immortality, and of the Universal Medicine.

Moreover, it possesses a Secret capable of realizing the world-old dream of the Brotherhood of Man.

It also possesses in every important centre of population a hidden Retreat (Collegium ad Spiritum Sanctum) where members may conceal themselves in order to pursue the Great Work without hindrance.

These houses are secret fortresses of Truth, Light, Power and Love, and their position is only disclosed under an oath of secrecy to those entitled to make use of them.

They are also temples of true worship, specially consecrated by Nature to bring out of a man all that is best in him.

The authority of the O.T.O. is concentrated in the O.H.O. (Outer Head of the Order), or Frater Superior. The name of the person occupying this office is never disclosed except to his immediate representatives.

There are many other officers, but they do not concern those to whom the present manifesto is addressed.

The whole of the Knowledge dispersed among the bodies mentioned in paragraph 2 has been sifted and concentrated in the following degrees.

Every man and woman that is of full age, free, and of good report, has an indefeasible right to the III°.

Beyond this, admission is only granted by invitation from the governing body concerned.

The O.T.O., although an Academia Masonica, is not a Masonic Body so far as the ‘secrets’ are concerned in the sense in which that expression is usually understood; and therefore in no way conflicts with, or infringes the just privileges of, the United Grand Lodge of England, or any Grand Lodge in America or elsewhere which is recognized by it.

Application for admission to the Order may be made personally at headquarters, between the hours of Ten A.M. and Twelve Noon on week-days, or by letter to the Grand Secretary General. In the former case, applicants should be provided with the Twenty Dollars entitling them to the Third Degree; in the latter, it should be enclosed with the application.

The First Annual Subscription is payable on taking the Third Degree; if this is taken after June 30 in any year, only half the amount is due.

Subscriptions of old members are due on January 1, but the Brother is considered in good standing, and he does not lose his rights, if it is paid by March 1. Should he fail to discharge his obligation by this date, he ceases ipso facto to be a member of the Order, but may be reinstated on paying arrears and Five Dollars extra. If his lapse extend to the next year following, he can only be reinstated under special conditions, and by the express consent in writing of the National Grand Master General ad vitam

The Constitution, Trust Deeds, Charters, Warrants and all other documents, are exhibited to candidates on their exaltation to the IV°, should they desire it.

Besides the free certificate of membership, special diplomas for framing are granted to all members at a uniform price of Ten Dollars. Special diplomas of the IX°, Twenty-five Dollars.

The privileges of members of the O.T.O. are very numerous. These are the principal:

In selecting members for advancement, attention is paid to their devotion to the Order, to their intelligence in apprehending the nature of its teaching, to their zeal in spreading the principles of the Order so far as they themselves understand them, though always with the discretion inseparable from the due guarding of the secrets, and to all those qualities of courage, honour, and virtue without which man is not worthy of that name.

The O.H.O. is only known to members of the VIII° and IX°.

The National Grand Master General ad vitam is not approachable as such by any person who has not reached the VI°.

All communications should be addressed to the Grand Secretary General, and all cheques drawn in favour of the Grand Treasurer General.