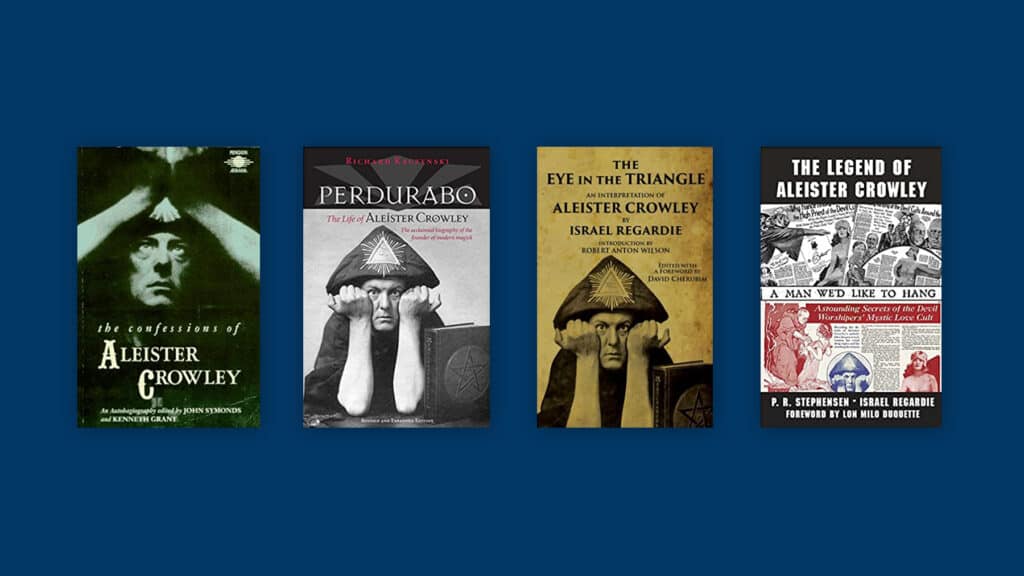 Many things have been written about the most prominent personality of the O.T.O., and most of them are unfounded or ill-informed. That is why we come to the aid of the searcher with the best, complete and documented collection of biographical books.

The Confessions of Aleister Crowley: An Autohagiography

The Confessions of Aleister Crowley: An Autohagiography, is a partial autobiography by the poet and occultist Aleister Crowley. It covers the early years of his life up until the mid-late 1920s but does not include the latter part of Crowley’s life and career between then and his death in 1947.

Crowley had originally intended that the work would be published in six volumes, but only two of these had been published before the Great Depression and various internal disputes led to the demise of the publishers. The project languished uncompleted throughout Crowley’s lifetime, and it was not until 1969 that the Confessions were issued in a single volume edition, edited by John Symonds and Kenneth Grant. Whilst the single volume edition includes much of the text of the first two volumes (and of course that of the latter four) it is nonetheless an abridgement. These original volumes include a considerable amount of text, and many photographs – particularly pertaining to Crowley’s travels and mountaineering exploits – that were not reproduced in the later single volume.

It is subtitled “An Autohagiography” which refers to the autobiography of a Saint, usually in a traditional Christian context, as in The Confessions of Saint Augustine. Crowley was brought up by his parents as a member of the strict Christian fundamentalist sect the Plymouth Brethren. While Crowley considered himself in many ways to be as holy as any Christian saint, hagiographies are usually written about the lives of saints by others and writing an “Autohagiography” was unheard of before Crowley. His self-titling of his autobiography as an “autohagiography” may be considered either as an example of Crowley’s wicked sense of humour, or his inflated ego, or possibly both.

Perdurabo: The Life of Aleister Crowley

Perdurabo, entitled after the magical name Crowley chose when inducted into the Hermetic Order of the Golden Dawn, traces Crowley’s remarkable journey from his birth as the only son of a wealthy lay preacher to his death in a boarding house as the world’s foremost authority on magick. Along the way, he rebels against his conservative religious upbringing; befriends famous artists, writers, and philosophers (and becomes a poet himself); is attacked for his practice of “the black arts”; and teaches that science and magick can work together. While seeking to spread his infamous philosophy of, „“Do what thou wilt shall be the whole of the Law”, Crowley becomes one of the most notorious figures of his day.

Based on Richard Kaczynski’s twenty years of research, and including previously unpublished biographical details, Perdurabo paints a memorable portrait of the man who inspired the counterculture and influenced generations of artists, punks, wiccans, and other denizens of the demimonde.

The Eye in the Triangle: An Interpretation of Aleister Crowley

This is the masterful biography of the Magus Aleister Crowley, written by the one person most qualified to write it. Israel Regardie was a friend and student of Crowley’s, and served as his personal secretary for some time. In this book, Regardie manages to write a fair and balanced view of Crowley. It is an intelligent and insightful look into Crowley’s life, Magick and Mysticism. Dr. Regardie interprets all this from the wisdom of experience. A member of the Golden Dawn, O.T.O. and A.A., Regardie writes with deep insight and compassion, openly revealing his own feelings, and thus providing a unique insight into Crowley. This book is the classic biography of Crowley.

The Legend Of Aleister Crowley has the focus and passion of timeliness. An invaluable and honest appraisal of a man who was called “monster”, “degenerate”, “traitor”, “criminal”, “pornographer”, and “devil worshipper”. Written by men who really knew the man behind the myth.