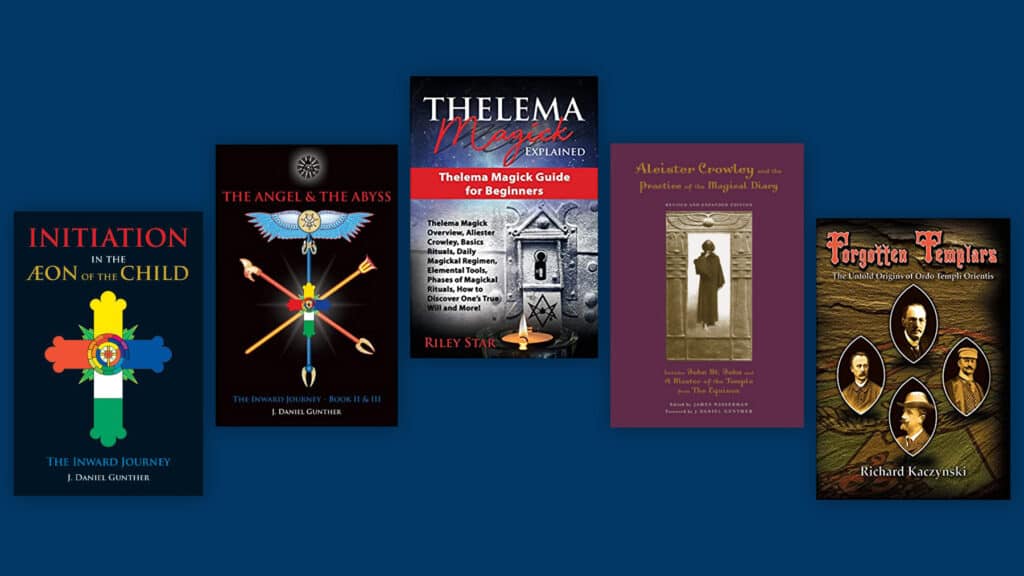 This collection of recommended books will help the reader deepen the teachings of Aleister Crowley and the doctrine of the Ordo Templi Orientis.

Initiation in the Aeon of the Child

This book’s primary focus is an understanding of the change to the formulas of Initiation brought about by the advent of the New Aeon–the Aeon of the Child–in 1904. It draws deeply from Jungian psychology, world mythology and religion, the teachings of Aleister Crowley, and the doctrines of the Mystery traditions. It explains how the revelations unique to this stage of human evolution impact the work of the individual aspirant. Much of what is written here is revealed for the first time, with every attempt to do so in clear and precise language.

Expounding on the sublime Formulas of Initiation confronting those who would aspire to these Mysteries, the author draws deeply from Jungian psychology, world mythology and religion, and the doctrines of the classic Mystery traditions, explaining how the revelations of Thelema apply to the individual. The Angel & The Abyss is written in clear, precise language that will aid those students who seek to navigate the difficult terrain of this advanced stage of the Spiritual quest. More knowledgeable students will find tantalizing clues to serve as guideposts and eventual confirmations of their direct experience.

The book offers copious illustrations including some in full color and numerous diagrams. It features detailed references that encompass ancient Egyptian hieroglyphic texts, the Old and New Testaments, the Apocrypha, Greek philosophy, alchemy, hermetic qabalah, and tarot, as well as the writings of Carl Jung, Eric Neumann and Aleister Crowley.

This book is about giving you the brief overview of Thelema Magick and its principle based from Aleister Crowley. He is one of the most important figures of magick and occultism. Crowley’s teaching is focused on finding one’s true will, which he believed is something that stems out from one’s core being; thus defining one’s true nature, path, your true calling or purpose – is instrumental in knowing your true self. This is what we want to accomplish in this book. We want to show you the philosophical side based from Crowley’s teachings, and also state in plain layman’s term about the nature of finding one’s will, and perhaps provide some practical guidance on how to approach such undertaking so that you can have a glimpse of what this subject is all about, and learn to use it in your daily lives. Thelema Magick Overview, Aleister Crowley, Basics Rituals, Daily Magickal Regimen, Elemental Tools, Phases of Magickal Rituals, How to Discover One’s True Will and More!

Aleister Crowley and the Practice of the Magical Diary

This important collection includes Aleister Crowley’s two most important instructional writings on the design and purpose of the magical diary, John St. John and A Master of the Temple. These were the only two works regarding the magical diary published in Crowley’s lifetime. Both were first published in Crowley’s immense collection of magical instruction, The Equinox. John St. John chronicles Crowley’s momentbymoment progress during a 13day magical working. Crowley referred to it as a perfect model of what a magical record should be. A Master of the Temple is taken from the magical diary of Frater Achad at a time when he was Crowley’s most valued and successful student. It provides an invaluable example of a student’s record, plus direct commentary and instruction added by Crowley.

With commentary and introductory material by editor James Wasserman, Aleister Crowley and the Practice of the Magical Diary is the most important and accessible instruction available to students of the occult regarding the practice of keeping a magical diary.

This revised edition includes a new introduction by Wasserman, a foreword by noted occult scholar J. Daniel Gunther, revisions throughout the text, a revised reading list for further study, plus Crowley’s instructions on banishing from Liber O.

A remarkably comprehensive and detailed study of the weird and wonderful world of late nineteenth century esotericism and fringe-masonry, that begat the Ordo Templi Orientis.

„An unlikely cocktail of actors and musicians, doctors and merchants, anarchists and sexual reformers populated the occult underground of the late nineteenth century. One by-product of this strange brew was the magical order known as Ordo Templi Orientis, or the Order of Oriental Templars, with its controversial mix of esoteric Freemasonry, yoga and sex magic. While its name is familiar thanks to its second Grand Master, Edwardian enfant terrible Aleister Crowley, its origins have subsisted as shadowy mytho-history. Until now. This revelatory study brings into sharp focus the perfect storm of personalities, movements, and circumstances that gave rise to one of the largest and most influential secret societies of our time.”

While obviously of particular relevance to those interested in the foundations upon which the O.T.O. was built, the book is really of importance to the study of 19th century occult and related movement, and has been deemed by no less a scholar than Dr. R. A. Gilbert to be “an essential resource for all students of the 19th century ‘occult revival,’ to be placed alongside such classics as Joscelyn Godwin’s “Theosophical Enlightenment“

The author, Dr. Richard Kaczynski, is of course well-known for his „Perdurabo”, a book widely acknowledged as the best (of the many) biographies of Crowley.